What is Diabetes Mellitus


Diabetes mellitus is a disease that can affect both cats and dogs.  The disease can cause 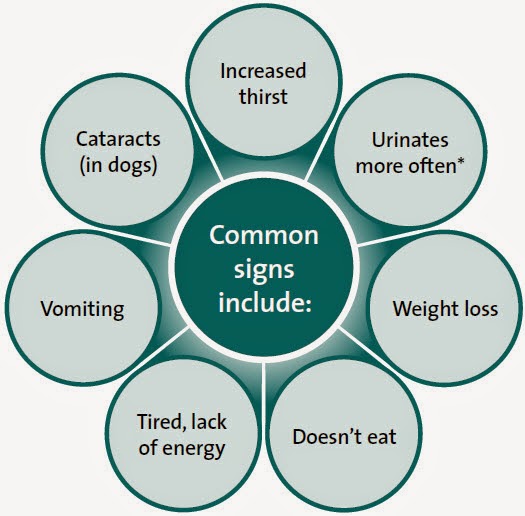 similar symptoms in both species including increased appetite, weight loss, increased thirst, and increased urination.  These symptoms all correspond to a lack of glucose in the body tissues.

When an animal ingests glucose it travels from the bloodstream to the tissues and eventually to the cells of the body via a transport hormone called insulin.  If the pancreas is producing too little insulin or no insulin at all the glucose remains trapped in the bloodstream where it is filtered by the kidneys.  In a non-diabetic animal the kidneys will reabsorb the glucose found in the bloodstream.  However, in the diabetic animal there is too much glucose to reabsorb and the extra is lost in the urine along with excess water.  This causes the animal to urinate more and thus drink more.


If the tissues of the body are not supplied with glucose the body goes into starvation mode.  It begins to breakdown proteins, starches, and fats as a source of energy.  Fats are broken down into ketones which can be used as an energy source in desperate situations.  Ketones are eventually excreted in the urine.  Even though the animal is eating more than usual the body is not getting the required glucose it needs so the breakdown of other energy sources, such as fat, cause significant weight loss.


Along with clinical symptoms the diabetic animal is diagnosed with blood tests and urine tests which can show increased glucose levels and the presence of ketones.  After a pet is diagnosed with diabetes it must be carefully regulated and maintained for the lifetime of the animal.
If you have any question please contact Central Kentucky Veterinary Center 502-863-0868.
Posted by Unknown at 9:36 AM